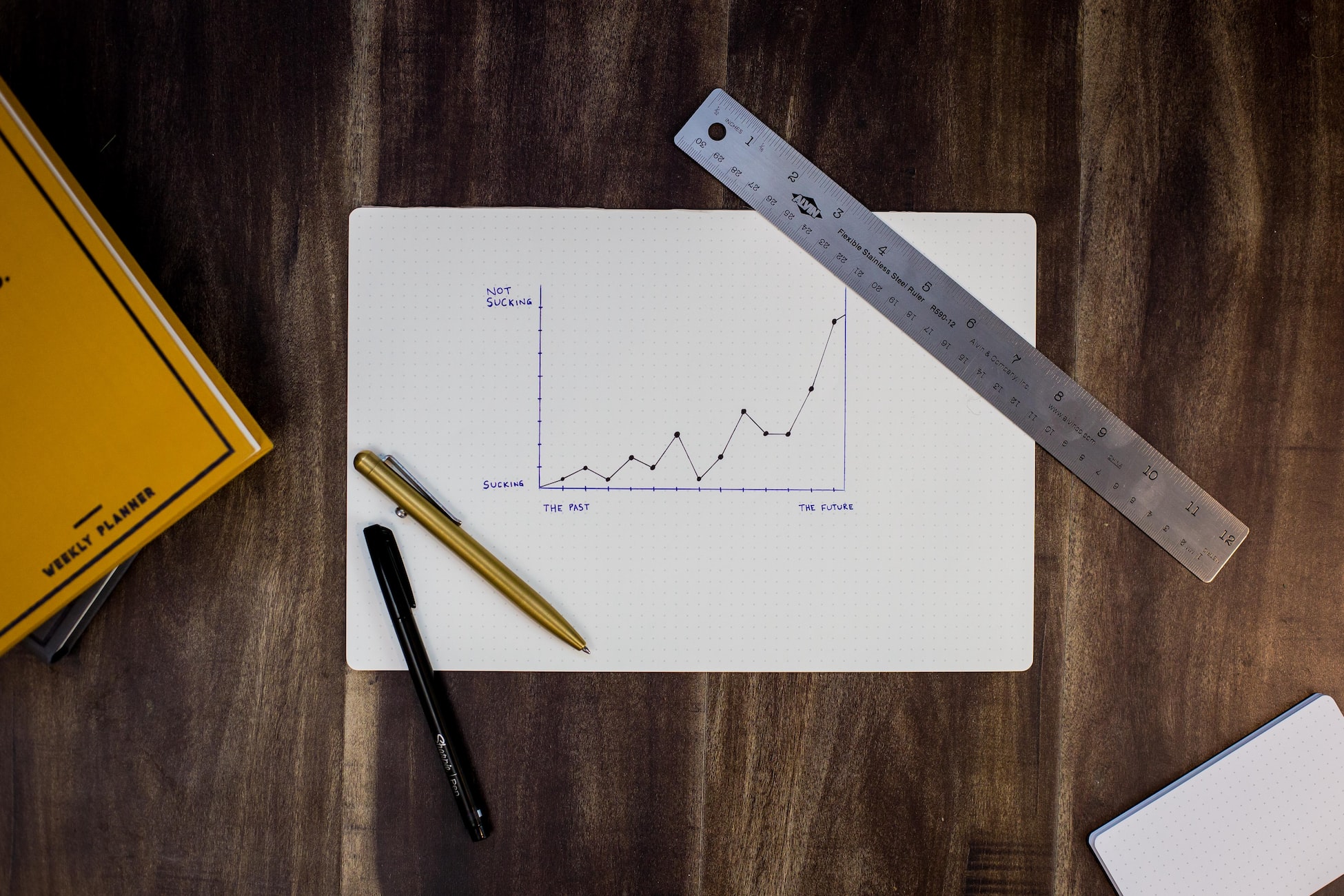 Atrocity Data and Interpretations
Caste based human rights violations in India is a serious problem of 250 million untouchables in India. This is a unique from of Hindu Society who considers it's outcaste as lowest of low in purity and the top class Brahmins, Kshatriyas, Vaishyas and most of the backward Shudra consider it is their duty to oppress and suppress untouchable communities and thus they don't feel any shame rather they feel it their pride to rape gang rape murder loot burn assault humiliate insult torture the untouchables who are called as Scheduled caste ,the name given by Indian Constitution. On the ground that tribal from forest inaccessible areas poor and illiterates, Hindu community behave in similar ways to tribal and carry out a with impunity. Though there is the Constitutional authority of National Commission for Scheduled Caste and Scheduled Tribes, the agency is good for nothing. Their members and chairman are political people appointed on the basis of their loyalty to the particular ruling party and they hardly perform their duty under pressure and obligation of their respective party. In millions of cases of violations of human rights in slums ,rural areas and in offices, hardly 1 or 2 percent people get any justice. Most Members don’t have idea as to how to use legal powered vested with them as they are politicians and no knowledge of legal system.

In our study of human rights cases since 2001 to 2019, we have noticed that cases of atrocities or human rights violations of untouchables and tribal are rising steadily despite Government claim that they are doing their best to prevent atrocities. As per the law , Ministry of Social Justice is preparing annual report of human rights violations and cases of discrimination is state and central services and placing the report on the table of parliament of India through the President of India. It has become a formality. As per the spirit of the Constitution, the government of India must debate and discuss the report every year and take stock of various legislations made for the promotion and protection of SC-ST Community or untouchable and tribal community but everything is on paper. During 2019, more than 55000 cases of serious Human Rights Violations of SC-ST had taken place which includes 7000 plus cases of rape murder and molestation. About two lakh cases of atrocities or human rights Violations are pending for trial for last 5to 15years and conviction rate is extremely low. Actual cases of caste atrocities and human rights violations are 10 times more or even if it may 20 times more as registration of atrocities in police stations is extremely difficult task. So most cases goes unreported due to fear of Police torture or fear of attack by Hindu castiest people or many a time ignorance about the law and their civil rights.

We urge global civil society to take note of serious state of affairs in enjoyment of civil rights by 350 million SC-ST Community in India and Indian Govt must life the ban of visit of special rapporteurs of United Nations various committees created for implementation of human rights instruments. Global Civil Society must ask questions to the state party India and forced them to implement provisions of fundamental rights in their constitution in a time bound manner and they must come out with a time bound plan to end caste based human rights Violations and show that India is truly a biggest and best democracy on this planet. 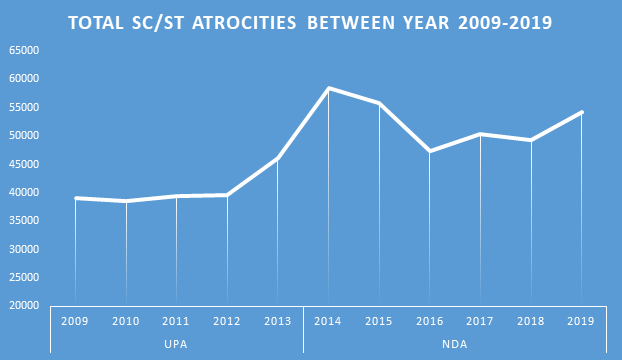 Line chart showing trend of total atrocity cases against SC/ST between year 2009 to 2019 with clear separation of UPA(Congress lead) and NDA(BJP lead) government periods
Total Crimes | Report from 2009 - 2019
This chart shows total registered cases of atrocities against SC-ST Community in India since 2009-2019 . It is seen that annual registration of atrocities cases has gradually increased from 2013-14 onward .The reasons of rise in total cases of atrocities are feeling among the high caste communities that police and judiciary could be managed and the perpetrators can get away with money muscle and power of their own caste sitting in police stations and judiciary. Registration in numbers are also due to increased awareness among SC-ST victim community due to rise in Education, awareness aboug rights through social media like whatsapp and Facebook and U-Tube. Large number of acquittal in pending cases in coursts is also responsible for thd mentality of criminals that though cases are registered but at the end they will get acquittal in the crimes against SC-ST community. This is also the indication of the failure of justice system in India. 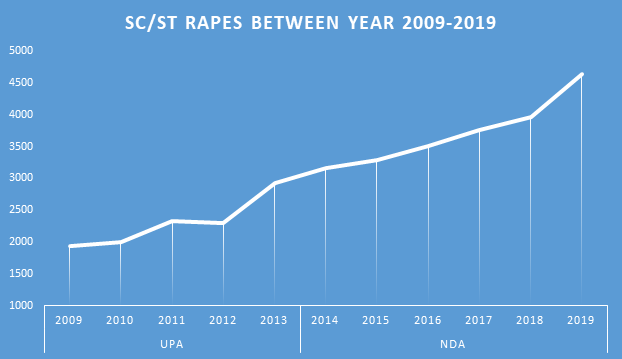 Line chart showing trend of rape cases against SC/ST between year 2009 to 2019 with clear separation of UPA(Congress lead) and NDA(BJP lead) government periods
Rapes | Report from 2009 - 2019
This Rape chart of SC-ST women is indicative of increased numbers of rape of girls and women in India due vulnaribility of SC-ST women who are mostly daily wage farm workers or marginal labourer or labourer engaged in mines,stone queries or big farms like wheat or sugar cane farms.It is also indicative of the uppercaste male dominance mentality that nothing will happen if they commit rape of SC-ST women and they can get away even if cought in the case and will get acquitted through their influence with police and judiciary who mostly belong to dominant castes.This also indicates increased awareness about provisions of the law against sexual violence and confidence in the Indian Constitution and hope for justice through legal means and also indicates increased awareness of right to live with dignity. 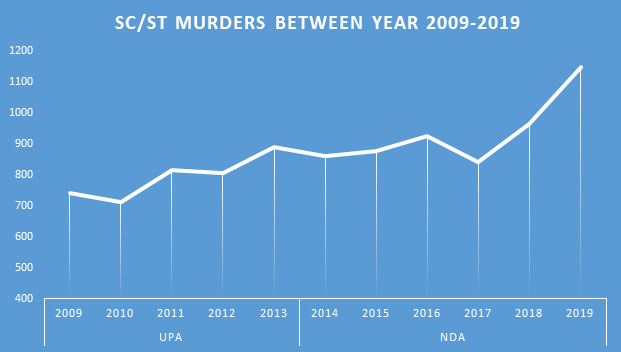 Line chart showing trend of total murder cases against SC/ST between year 2009 to 2019 with clear separation of UPA(Congress lead) and NDA(BJP lead) government periods
Murders | Report from 2009 - 2019
Murder and lynching if SC-ST men and women have been increasing every year due the dominant caste mentality that they can get away with murders because their castd men are in police and judiciary and powerful politicians brlongs to their community.Low rate of conviction in murder cases is also responsible for psychic of perpetrators of crimes that they will easily get away with use on money and muscle. This is also the failure of Justice system in India. Awareness about rights of SC-ST Community and provisions of law and atrocitiy act is also responsible for registration of murder cases by families of the victims.
DONATE TO PROTECT HUMAN RIGHTS
Together we can fight for human rights everywhere. We can stop torture, demand equality for people, and give hope to those facing attacks just because of what their caste is. Your donation can transform the lives of millions.